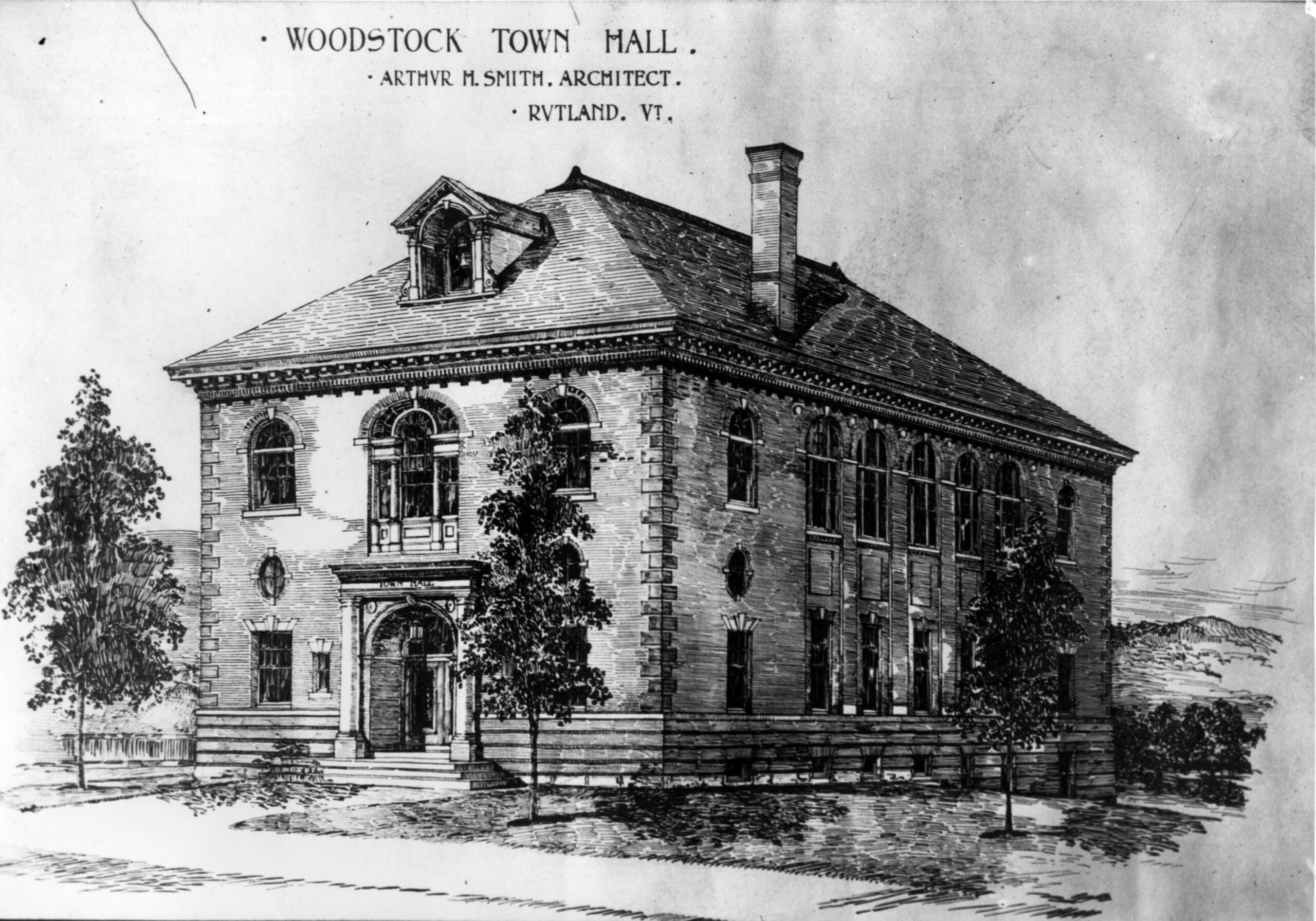 Hard to imagine, but where our lovely Town Hall is today was once a vacant lot. Town business, public meetings, and social gatherings were conducted in an uncomfortable addition on the back of the town courthouse on the Green. When that annex was finally torn down, a local newspaper wrote, “No one will regret to see it given up, for a worse-ventilated or worse-lighted place would be hard to find anywhere…”

In 1899, Woodstock residents came together with a vision: the town needed a town hall and an opera house where Woodstock residents could enjoy music, plays and, yes, opera. Town leaders arranged to sell the courthouse to Windsor County for $20,000. With that cash in hand and some other funds, they bought the property across from St. James Episcopal Church from Justin Mackenzie, hired an architect, and on October 12, 1900, the Town Music Hall opened with Sunshine of Paradise Alley, a drama that had played on Broadway. Touring companies, vaudeville shows, movies, and local groups from the Woodstock area performed often in subsequent decades.

The Victorian-style hall was splendid. The opera house was located on the second floor, with 400 floor seats and another 150 in the gallery. A painting of the Bay of Naples was depicted on the stage curtain; to the side there was a full-size reproduction of “The Greek Slave,” a highly acclaimed but controversial sculpture of a nude woman by Woodstock’s famed Hiram Powers.

The high-end touches continued: The proscenium arch was highlighted in gold! The building was lit by electricity! The theatre alone had 150 electric lights! The stage carpet could be changed from green to scarlet. It had two hot-air furnaces burning four-foot wood. Within a year, a private business signed a contract with the town to install a “moving picture” operation with a “sound machine.”

And that was just the second floor. The ground-floor main entrance hall could seat 600 for town meetings and other events.

Architect Arthur H. Smith of Rutland proudly wrote in a 1900 article that he felt it his duty to “…proudly carry on and perpetrate in the new Town House the quiet dignified feeling of many of Woodstock’s buildings.” In a nod to the importance of philanthropy in such a project, Smith wrote that “The remarkably complete appointments for the Opera House, chairs, scenery, carpets and decoration, etc., are due to the generosity and public spirit displayed by one of Woodstock’s prominent men, Frank S. Mackenzie.” (He would go on to establish the Lucy Mackenzie Humane Society in honor of his late wife.) 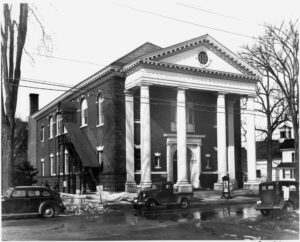 The hall was a source of great pride, but in 1927, a fire broke out and severely damaged the building. The question for the town—and it was hotly debated according to one report—was whether to tear it down and start over or reconstruct the classic building. The building was retained, but major changes were made. The structure was redone in the Colonial Revival style that we see today, including the portico and columns facing the Green. The second-floor theatre was relocated to the first floor where it remains today. The second floor became a basketball court. There was a kitchen and a banquet hall up there, too. Again, the community had banded together to support the hall, and by the summer of 1928, it reopened for live entertainment, movies, and town meetings.

“Generous donors have always played a large part in the maintenance of the grand old building,” notes current Pentangle Executive Director Alita Paine Wilson. In 1947, Margaret Moon gave $7,633 for new seating and rugs for the Town Hall Theatre and remained involved in its operation for years.

The townspeople have been supportive, too, through modest appropriations from time to time necessitated by ongoing maintenance issues. In the early 1960s, citizens formed a committee to ensure the wisest and most profitable use of the building, especially the theatre. In 1964, the town voted to spend up to $20,000 to remodel the second floor into offices; they have not been updated since. It was farewell to the basketball court that had succeeded the opera house, but the building was revived and remained an anchor for Woodstock’s cultural and civic life for the next several decades.

The synergy of modest taxpayer investments and generous donor contributions was especially evident in the mid-1980s. The building greatly needed rehabilitation, with one writer calling it a “neglected entity.” 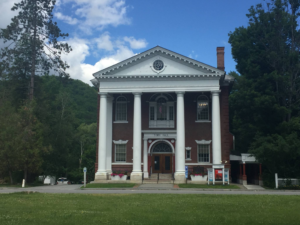 The hall was not only suffering cosmetically, it had serious structural and safety needs. To bring about needed improvements, the community agreed that if the Pentangle Arts Council could lead a Capital Campaign and raise $300,000, the town would put a bond issue of $168,740 on the ballot. It passed, and eventually the campaign raised more than $800,000 in donations from individuals, businesses, foundations and other sources, including a $200,000 anonymous lead gift. The combined funds allowed for a significant restoration of the Town Hall: installation of second-floor bathrooms, improved exits, handicapped access, sprinklers, and basic heating and ventilation improvements.

A few months earlier, Pentangle had purchased all of the theatre equipment, furniture, and fixtures from Richard and Elaine Tracy, who had been renting the facility as a private business. The theatre was thoroughly updated, including a new projection booth and lighting. The 1947 seats were sent away and refurbished, and both the auditorium and stage were modernized to accommodate productions of that era.

The rejuvenation got rave revues. In the decades that followed, the hall and theater served Woodstock well, as the focal point of government with town offices, document repository, and a theatre that brought high-quality performances to our community featuring some Broadway professionals and a great deal of local talent.

In 2014, Woodstock residents voted to approve the purchase of a digital movie projector as the industry stopped distributing 35 mm film. It’s the biggest screen in the Upper Valley, providing high-definition movies with Dolby sound. Support continued in 2019 with the Byrne Foundation’s $50,000 matching grant for interior upgrades that included state-of-the-art sound and light boards, LED lights, new carpet, and modest upgrades to the performers’ Green Room.

Woodstock residents are justifiably proud of the structure we call the Town Hall, from its first vision as an opera house to the classic building we have today. The building and its systems do not take care of themselves, however. Every few decades, new generations of Woodstock citizens are challenged to preserve and rejuvenate the grand Town Hall to ensure it remains a focal point in Woodstock’s community, cultural, and civic life.